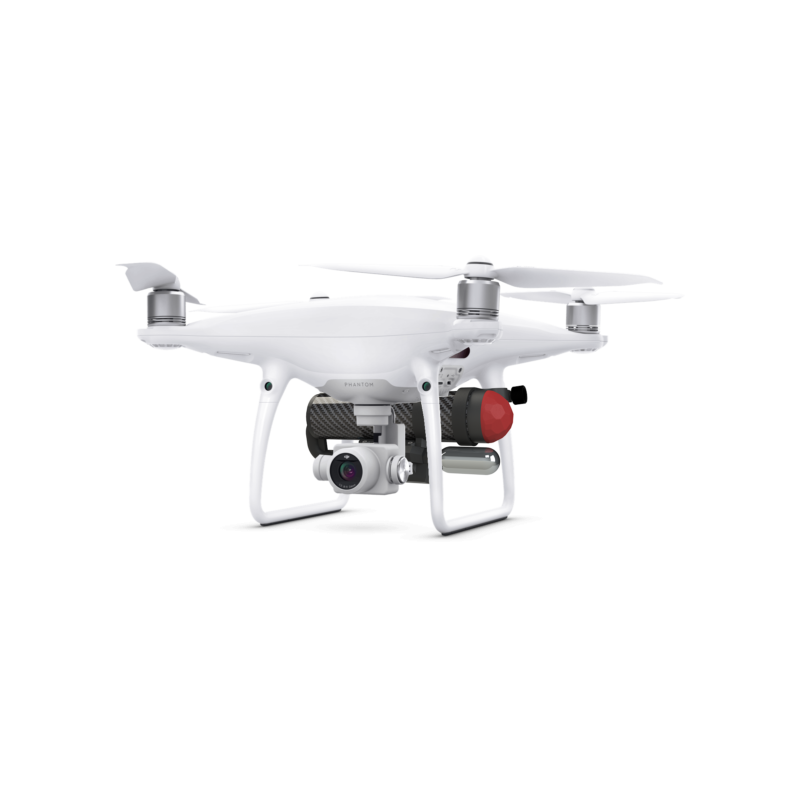 The Zephyr P4 parachute and circuit breaker set for DJI Phantom 4 RTK / multispectral drone allows you to secure your flights and slow down the fall speed of your Phantom in the event of a problem, simply by requesting the engines to be cut and the parachute deployed with the dedicated stand-alone remote control.

ATTENTION: the transport costs of your material are at your charge.

The most powerful parachute system on the market for DJI Phantom 4 !

The parachute is also available in a DGAC S1 / S2 / S3 approved kit with an internal circuit breaker (to be installed in the workshop).

Attached to the rear of the landing gear of your DJI Phantom 4, the parachute can be assembled and disassembled in a less than a minute. The parachute being fixed below the drone, it is necessary to deactivate the visual positioning sensors (Vision Positioning) so that it is not disturbed during the flight.
You just have to complete the start-up by installing the Zéphyr autonomous remote control and its base on the remote control of your drone. Note that these parts are designed to adapt perfectly to your drone and its remote control.

The Zéphyr parachute CO2 ejection system has been proven and used by a majority of French drone pilots for more than 5 years. Numerous successive tests and improvements have brought this system to levels of reliability never before achieved on a drone parachute.
The pressurized gas (60 bars!) is released in a fraction of a second to propel the parachute canvas out of their container. The excess gas released (each cartridge contains several tens pf liters) is used to accelerate the deployment of the canvases and minimize the loss of altitude when the parachute is triggered.

The system can be reset in a few seconds. The CO2 cartridge is the only consumable that needs to be changed on the system after deployment, and a cartridge only costs a few dollars.

The new PARA² canvas used in Zéphyr parachute systems are the result of 3 years of development. Their innovative ultra-light and unique design give PARA² canvas superior efficiency and stability. On single canvas systems, the sink rate is reduced to a minimum relative to the canvas area. each Zephyr parachute is designed so that the canva(s) keep the drone as flat as possible during its fall so as to minimize damage during impact.

The long-range communication system between the radio and the parachute is based on advanced technologies and LoRa modulation. Its range can reach several kilometers in optimal conditions and a long range option makes it possible to exceed 10 km.
The communication protocol is based on 869 MHz frequencies, free of authorization (433 and 915 MHz options possible). 128-bit encryption ensures data is not intercepted and the user is notified in the event of a communication disruption.

The parachute, circuit breaker and radio control modules are equipped with LEDs for status indication and advanced functions. The LEDs indicate the remaining battery charge when switching on and off as well as the battery level during charging. In operation, they indicate the instantaneous state of the system : correct operation, loss of radio link, low battery level, etc.
Coupled with a circuit breaker, the parachute turns on automatically when the drone is turned on. Without a signal and if you forget to switch off the parachute or the radio control, the modules switch off automatically after 10 minutes.

A time-stamped log system is integrated on the parachute and the radio. It records the trigger actions performed by the user for diagnostic purposes.

Many options ... ahead of the regulations

On the remote control side, it is possible to add a second redundant trigger button. This second button avoids the possible untimely pressing of a single button and doubles the autonomy of the remote control. Safety caps protect the buttons against unwanted presses. A long range option allows the radio range to be extended to more than 10 km if necessary. it is also possible to associate several radio controls with a parachute or several parachutes with a single radio control.

On the parachute side, a crash detection and automatic deployment module is available on request. This module will eventually be compatible with ASTM3322 standards and future European standards (classes C5 and C6 for the STS-01 and STS-02 scenarios).