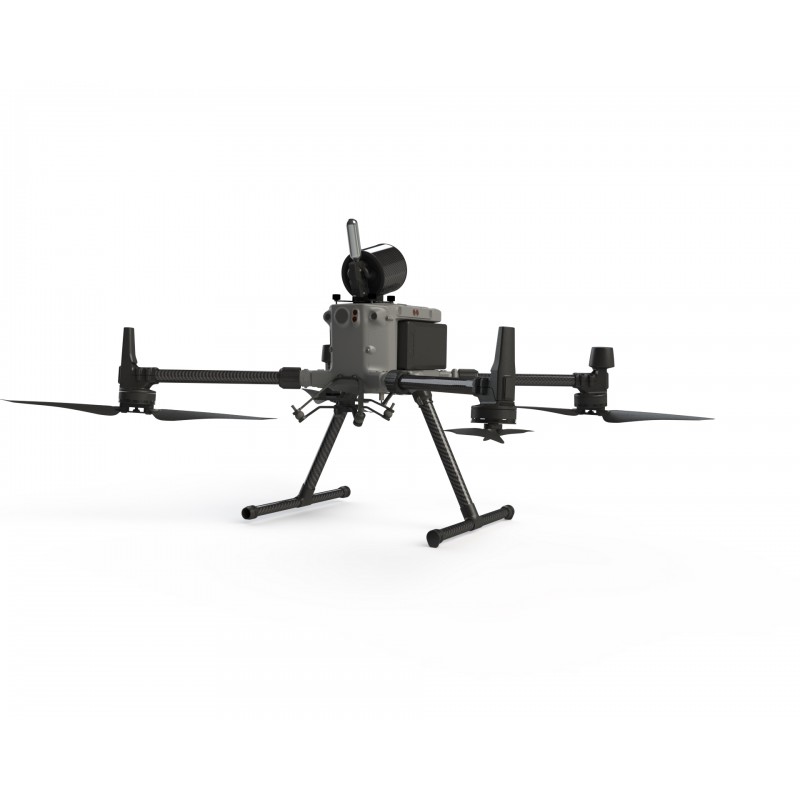 The simple parachute and Zéphyr M300 circuit breaker set for DJI Matrice 300 RTK drone allows you to secure your flights and slow down the fall speed of your Matrice 300 RTK in case of trouble, simply by requesting the engines to be cut and the parachute deployed. with the dedicated stand-alone remote control.

You have the choice between internal or external circuit breakers. Possibility of easily and quickly removing the parachute from your drone, especially during an S2 scenario.

The lightest parachute system on the market: only 450 g !

The basic parachute kit includes an ultra-fast CO2 canvas ejection system as well as a dedicated autonomous remote control with 30 hours of autonomy (to be attached to the Smart Controller).

The parachute is also available in a DGAC S2 S3 approved kit with an internal circuit breaker (to be installed in the workshop) or external (to be inserted between the batteries and the drone). Each version of circuit breaker includes an audible alarm and support to power and charge the parachute when the drone is on.

The lightest engine shut-off parachute system in the world!

The parachute kit + internal circuit breaker is the lightest solution available on the market, with a total weight of only 455g. It keeps the most important cargo capacity for the DJI M300 in S3 scenario: 1.25 kg of available payload! In scenario S2, the maximum possible weight increases to 2.25 kg.

Note that at equivalent payload, the flight time is longer with the Zéphyr parachute than with another parachute system.

The internal circuit breaker is installed in the workshop inside the drone by us. The operation is reversible, it does not modify the drone and allows the DJI manufacturer's warranty to be retained. The sound alarm module is connected to the USB-C socket available under the drone.

The circuit breaker can be used alone, without a parachute, in order to increase the available load and the flight time for scenario S2. The payload of the Matrice 300 in scenario S2 increases in this configuration to 2.7 kg!

Attached to the 4 upper threads of the drone, the parachute can be disassembled in less than a minute. An optional bracket is available on our shop to fix it under the drone when using the upper pod.

The kit with the external circuit breakers can also be dismantled in a few seconds. Circuit breaker modules are simply inserted between the batteries and the drone. They directly include the audible alarm. Their weight is 200 g.

All the kit elements can be stored in the original flight case supplied by DJI with the drone.

The pressurized gas (60 bars!) Is released in a fraction of a second to propel the parachute canvas out of its container. The excess gas released (each cartridge contains several tens of liters) is used to accelerate the deployment of the canvases and minimize the loss of altitude when the parachute is triggered.

On the Zéphyr M300 single-canvas parachute system, the CO2 ejection system allows the canvas to be expelled and opened in just 1.2 s, which corresponds to an altitude loss of 15 m from a initial fall speed of about 6 m / s.

The new PARA² fabrics used in Zéphyr parachute systems are the result of 3 years of development. Their innovative ultra-light design and unique design give PARA² fabrics superior efficiency and stability. On single canvas systems, the sink rate is reduced to a minimum relative to the canvas area. Used in pairs, PARA² fabrics do not interfere with each other and optimize the overall drop rate. Each Zephyr parachute is designed so that the canvas (s) keep the drone as flat as possible during its fall so as to minimize damage during impact.

On the Zéphyr M300 single-canvas parachute system, the fall speed for a mass of 8 kg is only 3.2 m / s, i.e. an impact energy of only 41 J, much lower than the maximum 69 J authorized in France.

The long-range communication system between the radio and the parachute is based on advanced technologies and LoRa modulation. Its range can reach several kilometers in optimal conditions and a long range option makes it possible to exceed 10 km.

The parachute, circuit breaker and radio control modules are equipped with LEDs for status indication and advanced functions.

A time-stamped log system integrated on the parachute and the radio. It records the trigger actions performed by the user for diagnostic purposes.

Many options .. ahead of the regulations!

On the remote control side, it is possible to add a second redundant trigger button. This second button avoids the possible untimely pressing of a single button and doubles the autonomy of the remote control. Safety caps protect the buttons against unwanted presses. A buzzer module is available on request. It generates an audible warning in the event of loss of connection with the parachute. A long range option allows the radio range to be extended to more than 10 km if necessary. It is also possible to associate several radio controls with a parachute, or several parachutes with a radio control.

On the parachute side, a crash detection and automatic deployment module is available on request. this module will eventually be compatible with ASTM3322 standards and future European standards (classes C5 and C6 for the STS-01 and STS-02 scenarios).